You may say "but you don't understand, you don't know what it is like." You are right. Everyone’s fight is unique to them. Everyone’s battle is personal. What torments you is not what torments others.  What is common is the belief it cannot change.

You may think these words are empty. To you right now they may make the hurt sear. They may pierce you in the place of sorrow that consumes because you have believed you are excluded from their hope. The words may anger you. Their promise seeming like a cruel false hope that taunts you. The sadistic ritual meant to show how cut off from their offered release. You may not even hear the words. Their silence the same as the unanswered pleas for rescue.

But, please keep listening for them. Because one day you will hear their whisper and you will turn to hear them. And you will take a step closer to hear them more clearly. And finally that step will work.
Posted by poured out at 5:32 PM 4 comments:

I'm visiting Sir. I've actually been here since just after Christmas. I'm staying an extended time actually. Sir had surgery so I came to spend time with him while he recovered.

He is fine and recovering well. One of the first things Sir asked at his 2 week follow-up visit was if he was cleared to play tennis and he was given the go ahead.

I drove here so I have no set time I have to return home. And I am not working right now so the timing is perfect for me to be here and help out. He is going to have a hard time getting me back in that car to drive home. He may have to go through a formal eviction process!  It has been wonderful to spend this much time together.

He was at my home for 17 days in November. We are approaching a month for this trip. It is heaven to me!

The weather has finally cleared up here in "the sunshine state" so we are getting to spend some time outdoors now. We also have my puppy who is so full of energy and she needs to get some outdoor time. Sir doesn't have a fenced in back yard so she can't just roam like she does at my home. Plus, Sir has a pond in his backyard that I'm not sure we could trust her to not splash right into!

Sir is so good with the puppy. I told his friends the other day that he was puppy-whipped!

There is actually nothing whipped about Sir. Except maybe his "real" whip. Oops! Maybe I shouldn't bring up that subject again or I might end up the one who is whipped - for real.

Happy Birthday to Us

This will be short and quick. But very very cute.

Today is my birthday. Tomorrow is Sir's birthday. How crazy is that -- one day apart?

I just had to share the birthday card Sir sent me. It is so perfect! 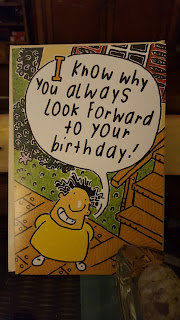 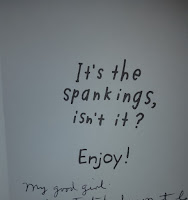 How perfect is that?

I am still working crazy hours.  Will be until mid-June. I ache for Sir so much, but he will be here at the end of June for a 10 day visit.

And...we will start getting have longer visits soon. I am so excited about that.

Once in A While 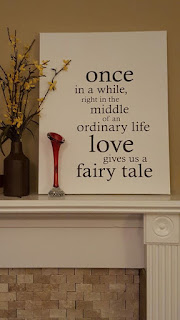 Sir visited this weekend.  We had quite the vigorous romp to begin to the visit.  It left me sore the entire time. I told Sir I felt like I rode a bucking horse!

Sir and I did a little shopping this weekend. We found this at at one of those chain craft stores. Simple, but so true. And so lovely.

We have been so fortunate to be able to visit almost every other weekend.  We might have some difficulty keeping that for the next 3 months.  I work in the Capital Projects Dept. at my company. We have a project coming on line soon and our window for completion is 60 days. Our entire team is going to work twelve hour days -- on-site. It may be that I have to work 13 and 1. Thirteen days on and one day off. My role really doesn't require that I be on-site, but that's what has been decided so that we show a complete commitment to the event as a team. There is also a 30 day period to begin some "pre-work."  That 30 day period starts this Friday. Oh...and we have a vacation freeze for those 90 days.

Sir left this afternoon and we really have no idea what March will look like as far as visits. That put a different kind of yuck in my stomach when I dropped him off at the airport.

I'm going to visit Sir this weekend.  I get to visit just about every other weekend it seems.  Sir is coming to Texas for Thanksgiving. It's his first visit here in a while.

I love him.  Sometimes I just get lost in the wonder of that. I lived such a very long time with just me.  And now I can't imagine life without him.

I kinda have this knack for gift giving.  Maybe it can't be called a "knack" since it is purposeful.  I listen with the intent of knowing what gift to give someone.  Who knows why I do this.  I just really like to see that joyful surprise on someone's face when they open a gift they really like.

As I mentioned, though, in my last post, this is more than difficult to do for Sir. He really does have anything he wants.  Even though I can't get him a specific gift, I do generally know what he likes to do to me.  So he gets lots of things with which we can experiment.  My body being the experiment, that is.

That being said, Sir doesn't think his good girl likes butt play.  I'm not sure why.  Maybe because I always stop it because it makes me feel like I have to go.  Enough said about that, but is this a common reaction? I would like to know.

Well, good girl had to do something to show Sir she really does like butt play....  How better than with a gift?  Sir was flying in on Friday, so I had to be sure the gifts arrived before he did.  I sent Sir a teaser on Wednesday when the first package arrived.  I texted Sir a screenshot of the delivery notice and asked "what could be in that package?"  Sir didn't know.  He hadn't sent me anything.

After telling him I knew what was in the package and that it was a surprise for Sir, we had to just wait until Friday.

I'm not sure if Sir likes surprises, but he can usually guess a gift from his good girl is something he will enjoy using on me.  I had the boxes prominently staged so they couldn't go unnoticed.


Needless to say it was not long before we were in the bedroom testing out Sir's new toy.  Sir's review is that, "That's just a great toy. It's lets you do two things at once."

Sir is flying home in the morning so I'm trying to finish up this post before we head to bed.  I look up into the kitchen as Sir has just come in to get a glass of water.  What do I see, but him pick up a wooden spatula I used earlier while scrambling eggs.  He looks at it from a few angles and says, "oh, there are a couple of things this is good for." Just throw my hands up and say, "I surrender." Which is point, in truth. 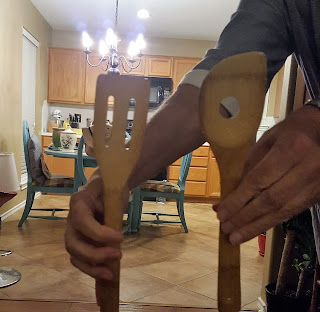 Sir has mentioned a couple of times the gifts he has received recently.  I thought I'd share a picture of  one of them.

April was our 5th Anniversary.  That seems so completely impossible.  I can think of no better way to express it so I'll just fall to cliche and say sometimes it feels like it was not that long ago and others that I've know Sir for such a long long time.

Sir lacks for nothing.  I finally got him to admit he has a wish list.  It's very short.  Only one item actually.  He would love to have a home theater room.  Since it is unlikely I could fulfill that wish, I have to depend on baser wishes of Sir. That is things he loves to do to me.

It 's hard to tell what Sir loves best.

Is it to torture my nipples?  At times, it feels it is so.
Marking my breast?  Definitely could be.
That damned wheel-y thing?  It's probably a contender.  Sometimes I think he likes it so much because I hate it so much. Either way, I'm not that much of a masochist to feed anything close to that wish.
Binding me?  It's up there.
Spankings?  No question.  Probably tops the list.  Evidently I need spankings in the morning to "start your day off right."  Spankings at night "so you can sleep better." And spankings sometime in between.  Those in between spankings have a less than clear justification.  In fact, I need spanking so much, says Sir, that it is difficult to imagine how I can even function when he is not here to administer all those "necessary" spankings.

So no question that Sir likes giving his good girl spankings. So I figure I can't go wrong with a spanking gift.  The options seemed endless.  Some I ruled out easily.  Those with imprints like "SLUT" -- definitely not me.  Some look like the imprint of a boot.  Definitely not Sir.  Something out there for everyone.  Then I saw this one.  It honestly looked daunting. Pretty darn hefty.  But, the 5 holes???? Perfect for a 5th Anniversary.  Decision made.

True to its looks. It is daunting, hefty and perfect has 5 holes. It certainly packs a punch.  And despite the agreement I thought we reached about harder spankings, or more pain in general, but a shorter duration, I still get 100 swats per cheek -- minimum.  M.I.N.I.M.U.M.  I don't believe that jives with the deal I thought we struck. Needless to say, Sir enjoys the gift. Other than his hand and the crop, it's pretty much been his tool of choice for my bottom. 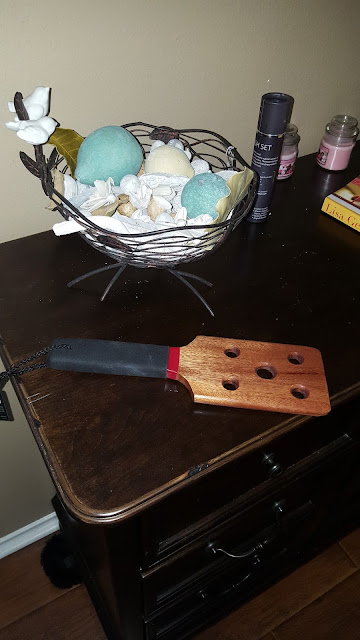